For if we have been united with him in a death like his,
we will certainly also be united with him in a resurrection like his.
For we know that our old self was crucified with him
so that the body ruled by sin might be done away with,
that we should no longer be slaves to sin —
because anyone who has died has been set free from sin.

The diagnosis came this morning. Stage 4 prostate cancer. It’s spread to your liver, rectum, and your hip bones.

The doctor tells you that you won’t have long left to live – 2 or 3 months at most. It’s pretty much a death sentence.

You could be angry at God... after all, you’re a pastor - a man of God and a shepherd of His holy flock. Is this how a loving God repays His servant?

But all that doesn’t matter. If anything, this is a sobering wake-up call from the Man above – a chance to your house in order and right the many sins of your past.

Here’s the thing, even though you’ve been good to your congregation – taking hours and days just to help them with their issues and bring them closer to the goodness of Christ – by doing so you’ve neglected and alienated your family, the people closest to you.

All the guilt… all the hypocrisy… all of it, has been gathering up inside you and burdening your soul. They’ve seen it all and left you.

You can only trust that God has not abandoned you as well.

Wretched & Depraved is a solo-roleplaying game where you play a dying pastor who attempts to reconnect with his estranged family and ask them for forgiveness for sins he committed against them in the past.

This game was created using "How to Make a Wretched Game" by Litza.

Contains optional rules for play with an actual Bible and/or a bottle of liquor if you so wish.
#

What people are saying about this game:

I originally came into this game expecting to hate playing as a pastor trying to reconnect with an estranged family. The more I played though, the deeper I fell into a more complex web of empathy and pity and disgust for the character I was playing. So pretty much the post Christian-but-not-atheist experience. - Mars. B

In order to download this solo christian game you must purchase it at or above the minimum price of $8 USD. You will get access to the following files:

Support this solo christian game at or above a special price point to receive something exclusive.

Feel free to pick up a Community Copy if you qualify for any of the following:
- You have grown up in a Christian home
- You identify as a follower of Christ
- You have been scorned by Christianity
- You have been marginalized and discriminated against by Christians
- You are a Pastor yourself or are related to a Pastor

I claimed a community copy of this game, but fully intend on paying for this game when I can.

Wretched and Depraved hurts, it really fucking hurts and I loved the catharsis from it. I grew up with a complicated relationship to Christianity and Sam really nails how complex it can be, especially in the later years. I originally came into this game expecting to hate playing as a pastor trying to reconnect with an estranged family. The more I played though, the deeper I fell into a more complex web of empathy and pity and disgust for the character I was playing. So pretty much the postChristian-but-not-athiest experience.

I also appreciated this game on the basis that it's really hard to find content that deeply, truly understands Christianity has been, and is currently, a tool for oppression and abuse without getting into "it's dumb to believe in God" territory. The deconstruction here is insightful and really thought out. I definitely see myself revisiting this again. 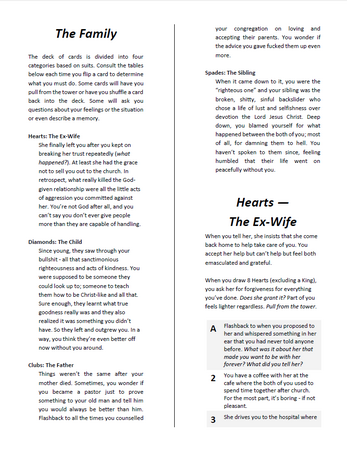 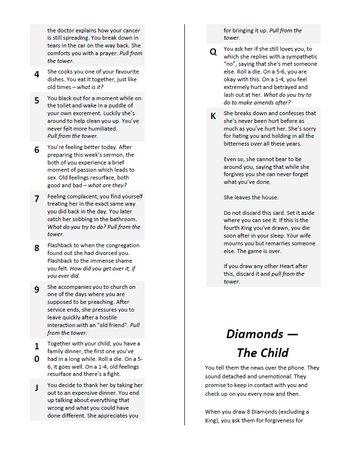