NOTE: This game is adapted from an old, alpha version of Mutant Monster Machine Girls which I'm currently redesigning using  a different engine. However, this version of the game is very much playable and I'd recommend you give it a try if you're into wild, bloody action horror.

In MUTANT MONSTER MACHINE GIRLS, you play as a member of "The Girls", a group of queer misfits fighting against an oppressive anarcho-capitalist state ruled by The Corporation.

Each of you fights against them because all your lives have been ruined by The Man Responsible, a dangerous and cruel servant of The Corporation. Because of his actions and the nature of your evolutions, you can no longer return to your previous lives and the people you love.

Your only solution? Exact your ultraviolent revenge on him and bring peace to the city by force!

Pick and mix-and-match from 3 different types of Evolution types, each with 6 different powers and modifications:
• The Mutant Girl:  Your evolution allows you to reshape your flesh, bones, and organs and turn your scars into weapons.
• The Monster Girl: Your evolution allows you to harness the mystical powers of monsters (your ancestors) that the Corporation has hunted down to extinction.
• The Machine Girl: Your evolution comes from enhancing or replacing your organic parts with superior machinery and powerful guns and swords.

If you ever wanted to play a VAMPIRE with a MACHINE GUN ARM or a FIRE-SPITTING NINJA who fights by SHOOTING BEES FROM THEIR FINGERS this is the game for you!

This game is built on Libreté  by Vivien Feasson, a Powered-By-the-Apocalypse-inspired system which replace static stats with a Push-Your-Luck style mechanic where you spend Blood token (which represent your rage, grief, love etc...) to add modifiers to your roll. However, roll too high and you have a chance to have an emotional Break Down and put yourself and your friends in danger.

Additionally, you don't level up in the traditional way of stocking up experience points. Instead, all you gain more evolutions and powers the more severe harm you take - but be careful! Get harmed or Break Down too many times and you'll eventually reach your DOOM, either dying in an epic fight or suffering a fate worse than death.

Transcend the boundaries between human and inhuman. Fight for your freedom. Reclaim your lives.

Shoutout to the immense amount of K-Pop (Red Velvet, EXID, Dreamcatcher) I listened to while developing the game as well as a handful of industrial music compilations on YouTube.

Playing this game is such a cool experience! It deals with difficult topics in a unique way and the players get to go all out Punk!

I APPRECIATE IT THANK YOU

MUTANT MONSTER MACHINE GIRLS by Samuel Mui is a game inspired by gory Asian films. You play as the Girls, "a group of queer misfits fighting against an oppressive anarcho-capitalist state ruled by The Corporation", which sounds fucking badass. The game cleverly blends exploitation films with cyberpunk elements, and I would recommend anyone who is into either of those to get this game.

This is fucking awesome 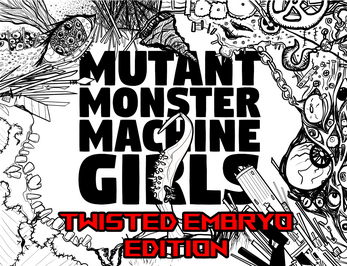